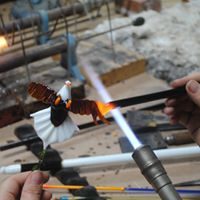 The shop was started by owner Thomas von Koch in Germany in 1982. Thomas who was 25 at that time knew very little about running a business. He started everything from scratch as a passionate lamp worker who wanted to create pieces that reflected how he felt. He started with vases and tea light candle holders and bongs as most lamp workers and glass blowers did at that time. As time progressed, so did he. Thomas spent the majority of his childhood summers in a small cottage in Austria. This is where he was taught by his father to love, respect, and appreciate nature. Thomas began to reflect back on these times and decided to use nature to revamp his creative style. He soon met like minded individuals John Zinner, Sandra Jahn and Anja Stötzer. These three started their research and began creating for the world.

When the economy began to fail, he and his team became economical refugees, if you will, in the U.S. Being that WGK Glass Art already had a U.S. customer base, it wasn’t long before the customers started to build up. This is when Kimya Bolton was asked to join the team to help organize, market, promote, and make sure the highest level of customer satisfaction was being met.