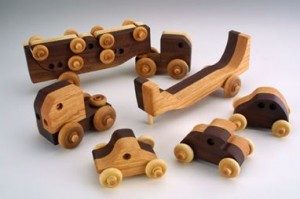 Steve Baldwin has been creating wooden toys since the late 60’s.  He started as an industrial arts teacher which eventually led to a woodworking hobby.  In 1976 that hobby became a profession when he started Baldwin Toys.  Retired from teaching, this is now his career.

Baldwin Toys is a family-operated company that handcrafts wooden toys with quality reminiscent of yesteryear.  Since 1976, our toys have been displayed at prominent arts and crafts shows, featured in publications and have received numerous awards.  They have also been shown in Mannheim Steamroller’s Christmas video “The Little Drummer Boy.”  The premise upon which we create our toys is simple.  We want our toys to be around for generations to come!  Our toys are sure to become your keepsake heirlooms.