Mazet Studios is the combined work and energy of Josh and Eli Mazet and has grown to include younger brother Tim and mother Tym. 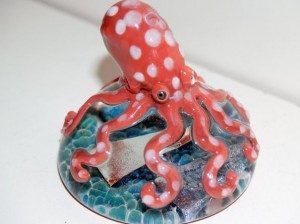 Josh Mazet has been working in art and art education for over ten years.  A BFA graduate of the University of Oregon, he was a resident artist in the university’s ceramics department and instructed their Wood Fire Ceramics program for three years.

About a year after Josh had left the glass shop his brother Eli expressed an interest in learning to work with glass.  Together they set up a small lamp working station in his garage and so began Eli’s journey into glass.  During the next two years, while working two jobs, Eli logged hundreds and hundreds of hours behind the torch.  In glass, he has found an outlet for his high energy and discovered a passion for creating art.  Eli’s outgoing personality, work history and the love of glass prompted him to go to the coast where he approached shops to sell his whimsical glass creatures.  The response was exciting and encouraging.  Eli quickly envisioned a family studio and asked Josh to join him in the development of a worked glass business.

Mazet Studios is the combined work and energy of Josh and Eli Mazet and has grown to include younger brother Tim and mother Tym.  The studio is expanding beyond lamp work to include fused glass and pottery.