Jeff's unique touch is evident in each dimension of his art. His forms, carvings, and finish combine to leave his inimitable signature. 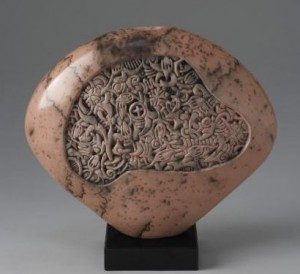 Jeff began working with clay over thirty-five years ago, at studios around West Los Angeles. Although he was always devoted to ceramics, it was not until college that clay became his career choice.

During his studies in political theory at UC Berkeley it became clear to him that clay had chosen him more than he had chosen clay. His realization that the only life he could justify was as a ceramic artist was as surprising as it was certain. He immediately reoriented his approach from functional to sculptural and began to present his work seriously. He has been gradually refining and evolving his work ever since.

Jeff Margolin’s clay sculptures convey a strong personal style that reveals an engaging and sensual aesthetic, often containing subtle philosophical statements. His pieces are dynamic in nature and their sense of flow and movement is inspired by artists such as Dali and Giger. There is a unique merging of textured and polished, transparent and opaque, rounded and sharp, which makes for a destabilizing artistic message. The sculptures are prominent in their space, while constantly altering it.

Jeff’s unique touch is evident in each dimension of his art. His forms, carvings, and finish combine to leave his inimitable signature.