I love unusual combinations of materials. I find the blend of tough stainless steel and this wonderful translucent resin sexy and fresh. 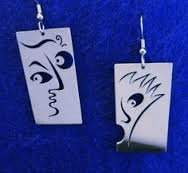 Christopher Royal is a Chicago-based artist, designer and sculptor whose work has been carried in hundreds of galleries, fine shops and museum stores across the United States and Europe for almost two decades. His miniature sculptural work has been featured many times in the windows of Tiffany and Company. He was commissioned in 2011 by the City of Chicago to paint a 75-foot mural at a Chicago Metra entrance on the city’s north side. In September of 2012 Mars Gallery in Chicago hosted a show of Royal’s large-scale Kinetic sculptures.

Mr. Royal has worked for more than 4 years as a resident artist and sculptor in the art department for Harpo studios creating countless scenic elements for The Oprah Winfrey Show. His diverse projects there included everything from hand icing a 25-foot tall, 30-foot wide gingerbread house to designing and building all the floral displays for the Royal Wedding show. Most recently he helped create the set for The Rosie Show including designing and building that show’s signature element, the Toy Explosion Chandelier.

In addition to his Kinetic Jewelry line and his commission work Royal has served as a principal designer for art furniture manufacturer Rockledge Design Studios for the past 12 years. His work for Rockledge includes over 100 line items as well as individual furniture and sculpture commissions. His furniture designs for Rockledge are in several celebrity collections and were featured on television in the first season of American Idol. Royal’s chair designs were also permanent features on the set of The Rosie Show.

Artist Statement: “ I love unusual combinations of materials. I find the blend of tough stainless steel and this wonderful translucent resin sexy and fresh. It’s urban and sophisticated but playful at the same time. This collection is inspired by my kinetic sculptures and my desire to create unusual objects of beauty and balance.”