Sometimes the wait between making and bisque firing to glaze firing presents an anticipatory wait that fuels additional and alternative ideas. 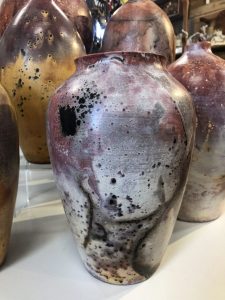 A native of western Pennsylvania, the immediate convergence of Mark Golitz’s work translates from his exploration of the earthen colors of hills and streams of his childhood, his professional career in the woodlands across the United States and internationally, and his relaxed inshore and deep water experiences of the Southern Outer Banks of North Carolina where he now resides.

Mr. Goliz has been making ceramics full time since 2010 and has taught ceramics as a college adjunct instructor, as well as teaching in his own studio.  He is quickly becoming known as a leader in the market place for his saggar-fired vessels.  “As a functional and contemporary pottery maker, I explore how to plan, design, make and market my work.  Sometimes the wait between making and bisque firing to glaze firing presents an anticipatory wait that fuels additional and alternative ideas,” he says.

Mark Golitz’s work can be found at galleries and retail outlets across the Eastern United States.  His work is featured and sold in OUR STATE a North Carolina Based magazine with a circulation of more than 1.1 million people.  Commissions include the US Marine Corp, the USS New York, local restaurants and hotels, Carteret General Hospital and Nationally branded businesses.